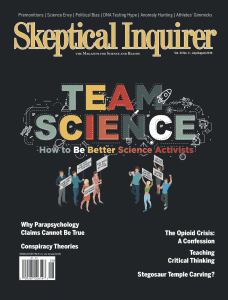 As our society confronts challenges and threats such as climate change, the anti-vaccination movement, and the deluge of false claims from the peddlers of pseudoscience and snake oil, it’s more important than ever that the public become more aware and accepting of science. Yet science advocates and skeptics are constantly met with resistance. How can we make a more compelling case?

In the latest issue of Skeptical Inquirer, the magazine of science and reason, social psychologist and former Disney “imagineer” Troy Campbell encourages the reality-based community to take advantage of the tools of marketing and persuasion to bring more people onto what he calls “Team Science,” rather than driving them away by labeling them as enemies.

“Team Science will lose if we don’t deal with the basic human forces that lead to resistance,” writes Campbell, who has also worked for companies such as Netflix and Apple. “Thus to win, we need to borrow more techniques from Disney and marketing.”

Also in this issue: Felipe Nogueira unpacks the vast charlatanry of the so-called medium and healer John of God; Arthur S. Reber and James E. Alcock evaluate the existing evidence for the claims of parapsychology, the state of which has not changed since the 1880s; Joe Nickell unpacks the tricks and tropes of those claiming to possess the power of precognition; Joseph Uscinski discusses his research on conspiracy theories, reminding us that “no one believes that they believe in conspiracy theories (instead they believe that they believe in conspiracy facts);” and so much more.

The July/August 2019 issue of Skeptical Inquirer is on newsstands now, and you can subscribe in print or online.